A few weeks ago, I enjoyed a fantastic weekend on the water – what has now turned out to be my last full weekend on the water before I head across the pond for my Atlantic race.  There’s not much to tell, as it was simply a quiet, relaxing cruise up the east coast and back, but I did want to share some pics with you…

I was the only girl in the crew, there was a pro skipper on board, and a crew of men, of mixed experience. I have to say (and not because they’ve paid me!) but they were one of the nicest crews I’ve ever sailed with, and some of the most intellectual people I’ve ever sailed with to.

One of our crew had never sailed on a big boat before, and was given the experience as a birthday present from his wife, and he didn’t stop smiling and loving every minute for the entire trip, which was just great to see. The rest were fairly experienced, and just a great bunch of people to meet and sail with.

We had a fantastic weekend on the water, heading up to Harwich. Where we moored over night, before heading home on the Sunday. The wind vanished on Sunday and saw us left with mill pond conditions, and at times thick fog. 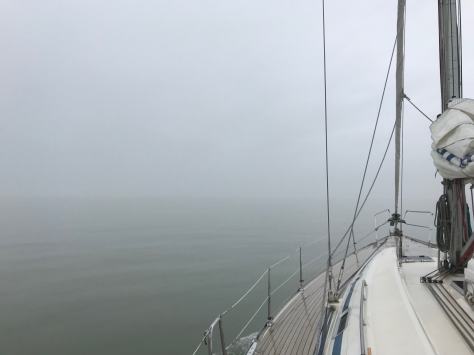 I’ve not sailed much in fog before, so it was a great experience. With it being foggy, we didn’t get to see a lot, but we were blessed with 3 separate dolphin sightings. Or was it a porpoise’s!? The first time, I was the only one to see a grey body leap out of the water. I couldn’t believe my eyes, and shrieked at the rest of the crew. An hour or so later, we were graced with these beings again. And then finally, an hour passed and again we were on deck excitedly trying to work out what it is we’re seeing. The jury is still out on whether it was dolphins or porpoise’s that we saw. I will leave that for you to decide – and if you think you know, please let me know in the comments!

I'd love to hear from you! Leave a comment, reply, or question here... Cancel reply

This site uses Akismet to reduce spam. Learn how your comment data is processed.

A sailing, boating and blog of beaches and water based adventures. Perfect for anyone who loves the water